These characters are introduced in the first two books of the series, The Advance Guard (2009) and Dinetah Dragon (2011). 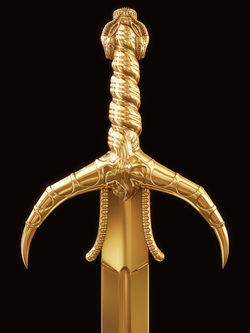 The Guardsman is a paladin knight, linked to a supernatural Sword which has been passed down through the Sharpe family for generations since the days of the Roman Empire. A Guardsman has participated in nearly every major conflict in human history, including most of the conflicts the United States has participated in, with the sole exception of the Vietnam War.
Ken Sharpe takes possession of the Sword as a nine year old boy in the 1960's when his uncle Jefferson resigns from the Army, having served as the Guardsman during World War II and Korea. He trains with his uncle to wield the Sword, and later with shadowy agent Frank Gabriel after Jefferson's untimely death. His adventures as the Guardsman are wide and varied; the most prominent of these include a mission to Kuwait which brings him in contact with Cyrus Salem for the first time; a debrief mission to Pakistan to find "Kitty" Lazarus; and a supernatural confrontation in Greece.
Cole Sharpe, Ken's son, unwillingly takes up the Sword after Ken's death during a mission to Austria. While Cole's exploits with the Sword are shorter-lived than his father's, the stakes are considerably higher, with first the peace of the world at risk. Eventually, Cole's Guardsman faces down the forces of Armageddon itself, trying to fulfill the paladin's purpose as God's knight-errant. 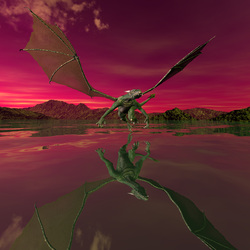 A tormented soul for most of her life, Ariel is a Navajo woman of great intelligence and fragile emotions who winds up in a shady government experiment to link her to a Supernatural Tactical Beast, a genetically-engineered dragon code-named 37A. Her experiences with the project mutate her and bond her to the 37A, first telepathically and then physically, merging her body with the dragon's and granting Ariel the dragon's natural abilities of flight, telescopic vision, and fire.
Found helpless on the streets of Washington, DC by Ken Sharpe, she is brought into the CIA fold, eventually into the team designated CIBO #A13, and embarks on adventures with the team which both embolden her to her newfound abilities and give her what amounts to a family bond with her teammates. Though her psyche is still highly fragile, to the point that she becomes despondent enough to attempt suicide, she thrives on the love of her friends and teammates, particularly after Ken's death and the arrival of Cole Sharpe.
Throughout her experience with the team, including her close friendships with Cyrus Salem and "Kitty" Lazarus and her intensifying relationship to Cole, she seeks the answer to a lifelong vision, searching for "the love that will save a life."

The resident mage on CIBO #A13, Cyrus Salem has seen action for, literally, hundreds of years. It's not quite known exactly how old Cyrus is, but his presence has been felt at various points in human history. In particular, his presence in the U.S. armed forces is traced as early as World War I, where the gradually shrinking wizard appeared in Europe searching for a mysterious demonic entity. He appeared again in Vietnam, then eventually in Kuwait in 1991, where he met Ken Sharpe. The two men would embark on a long-running professional partnership as the founding members of the team that would eventually become CIBO #A13.
On Ken's death, Cyrus brings Cole Sharpe into the fold with the team and delivers the Sword to the new Guardsman. His capacity with the Guardsman shifts to a mentor from simply a teammate, as he gives advice to Cole on how to handle the Sword as well as his teammates. Cyrus becomes the center of one of the team's missions when he is captured to power a magic weapon of mass destruction, leaving it up to his team to either rescue him or destroy him to prevent the weapon's use. 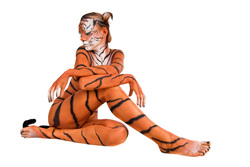 One of the first female SEAL operatives, Katrina "Kitty" Lazarus found herself transformed by a chance encounter with the Hindu goddess Durga during a compromised mission in Pakistan, a divine liaison which granted her the body of a humanoid tiger and many superhuman abilities ... but left her in servitude to the goddess until such time as Durga did not need her, and unable to change back into her human form. Despite her transformation and a dangerous confrontation during the mission's conclusion with a demon feeding off of the locals, Kitty survived all of the encounters and was retrieved by Ken Sharpe and Cyrus Salem, who brought her back to the CIA and eventually brought her into CIBO #A13 to placate her for the loss of her SEAL status.
Kitty gains a reputation as a combat monster on the team, fearless to the point of near-insanity when the bullets start flying, a quality that may be attributable to her supernatural powers, including a peculiar resurrection ability after she is apparently killed several times. She butts heads with all of her teammates at many points in her involvement with the team, including eventual best friend Ariel Vibria and new teammate Cole Sharpe, but proves herself a loyal friend when the chips are down, particularly when it comes to anything involving Cyrus.

CIBO #A13 is a supernatural Black Ops team, tasked with combating demonic threats to U.S. security interests. Three of the team's members experience demonic encounters prior to their inclusion on the team: Ken Sharpe battles the monstrous Zamhareer on a Maryland freeway in 1975; Cyrus searches throughout the 20th Century for speed demon Jahannam, eventually finding him in Kuwait in 1991; and Kitty's transformation comes as a help to Durga who is attempting to flush out a cannibal demon called Mahishasura. Other demons confronted include Sheol, a matriarch who hides within a holy European site seeking flesh; Azi-Dahaka, an embodiment of evil contained in a child ruler's body; and eventually Abaddon, the swordsmith of Hell who attempts to bring down Armageddon upon the world through a human host wielding his weapon, the Sabre of the Invader.
Page design copyright 2012 Desert Coyote Productions/Don A. Martinez, all rights reserved.